Welcome Back To Nightingale Care Home 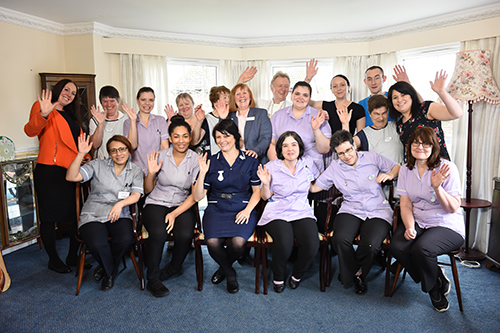 How wonderful to see some sunshine, and with it the anticipation of longer, warmer days to come. Here at Nightingale Care Home we celebrated a very special birthday last week: On Tuesday, John turned 90! Here you can see him with his wife as Emily brought the cake to him.

To mark such a special birthday, I decided to have a chat with John’s wife Isobel to find out a little of his history:
Born in Dorset, in 1926, his father was a priest and went on to become the bishop of Dunwich. After studying at Sherborne Public School, John went on to graduate in Modern Languages at Oxford University, then completed his 18 months of National Service with the Marines. Later on, Worksop College in Nottinghamshire had the benefit of his skills where he was a School Master teaching Modern Languages for more than 30 years, and a House Master for nearly 20 years.
In 1970 John married Isobel, and they went on to have two sons, and now have four grandchildren. Norfolk beckoned the couple in 1985, but John wasn’t ready to hang up his teacher’s hat just yet; he transferred his expertise to Taverham Hall Preparatory School for a few more years.
In his private time John loved music, was a keen musician and played the cello. Isobel tells me that he also sang very well and loved to sing with choirs. Over the years he had suffered a stroke and some T.I.A.s (transient ischaemic attack – or a “mini” stroke) and this brought on Vascular Dementia. Although he stayed at home for as long as possible, eventually the decision was made to bring John to live here with us in 2013.
At Nightingale Care Home we specialize in Dementia care, and although this can be a difficult decision for families to make, we hope that they are reassured by knowing that when their loved one comes here (for respite or long term) they will receive 24 hour care as needed by a trained team. We do our best to encourage individuality and as much independence as possible, whilst being on hand to give as much assistance and support as needed – in short “Person Centred Care”.
Click on this link for more information about a T.I.A.Transient-ischaemic-attack and here for information about Vascular Dementia

Meet a Nightingale! Allow me to shine my “spotlight” on Marian!

Marian gave up her job in 2013 to spend more time with her Dad (Fred) and to look after her Granddaughter. Fred came to Marian at Norfolk care homeslive here at Nightingale Care Home early in 2014, and Marian and the family became frequent visitors, until his passing in the spring of 2015.
With her Granddaughter starting school Marian found she had time on her hands and decided to find something worthwhile to do. At that time we had decided to take on a second person to assist with Activities, and so Marian applied for the post. She told me that she had “always been so impressed with the care” she saw her Dad receive, that when she was offered the position she “jumped at the opportunity to give something back and help make a difference”.

In October 2015 we were delighted to welcome Marian to join Carole in our Activities Team, and she tells me she’s really enjoying interacting with the residents. In particular she enjoys working 1 to 1 and finding about each person, and is especially moved when she walks into the home and is greeted with hugs and kisses.

As well as helping our residents to feel valued, motivated and settled, Marian has a talent for fundraising! She has recently been working hard selling raffle tickets for Easter, and is enjoying brainstorming to come up with new ideas to raise money for the Resident Comfort Fund. Last week Marian and Carole were busy helping make decorations for Easter. In the photo above you can see Marian, with Florence wearing the hat she made in time for the Easter Party on Good Friday. We are very pleased to have Marian on board and already she has made a difference!

Thursday 24th March: Easter Church Service. For any residents and their families who wish to attend. The service will run from 2.30 – 3.30pm with refreshments to close.

Friday 25th March: Easter Party! From 3.30pm. There will be a buffet, and we will be entertained by Vicky. Raffle tickets are still available, and prizes will be drawn on the day! Thank you everyone who has donated prizes or bought tickets.

Happy Easter from myself and the team at Nightingale Care Home!